More Image Details Than Fisheye
The CB-500Ap-360P camera delivers much more image details than the fisheye camera in the same sensor size and resolution. The fisheye camera typically has around 60% of the image sensor pixel utilization. The ImmerVision Enables 360° panomorph lens, however, reaches about 80% of the image sensor pixel utilization. Furthermore, this camera is compatible NOW with major VMS solution providers thanks to the open ImmerVision Enables 360° video standard.

180° Panoramic View and 360° Surround View
The CB-500Ap-360P camera can be either mounted on the wall to offer the 180° panoramic View, or mounted on the ceiling to offer the 360° surround View. Due to the optical characteristic of the ImmerVision Enables 360° Panomorph lens, one camera can be enough to view the entire open area at once, which typically has to be done with multiple traditional cameras.

Small, Compact, Powerful, and Affordable
Like other Brickcom Cube cameras, the CB-500Ap-360P camera features the small form factor, PIR sensor, white-light LED, built-in 2-way audio, Micro-SD card slot and USB port. This camera can be powered by either Power over Ethernet (PoE) or DC12V, and the DI/DO interface is provided for the user to connect the external sensor and/or alarm device for further security control purposes. With the Brickcom BRC64 Pro PC-NVR, the image de-warping and Edge Recording functions are provided free-of-charge for up to 4 cameras.  All these advantages make this camera highly competitive in both performance and cost for the indoor open area viewing applications. 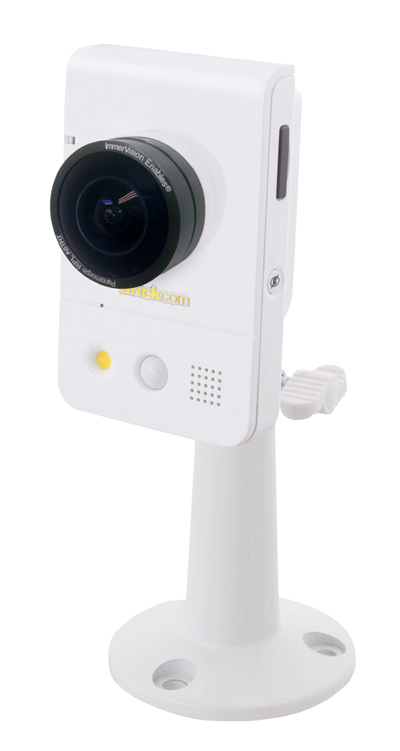